A poll of BBC pundits on 31 March 2014 produced house price rise predictions across the UK.

These fuel tentative grounds that the property cycle is turning just a little bit:

These predicted rises look bright, but the figures obscure a fall from November 2007 to February 2009 that the country has barely yet risen above.

Yet Wales as a whole has seen gentle unbroken growth since June 2013, and this is encouraging after a flat graph since 2009. See below: 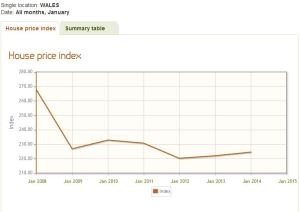 So only a brave soul would predict the future, yet there appears to be cautions optimism that it may be a good time to buy property for those who can.